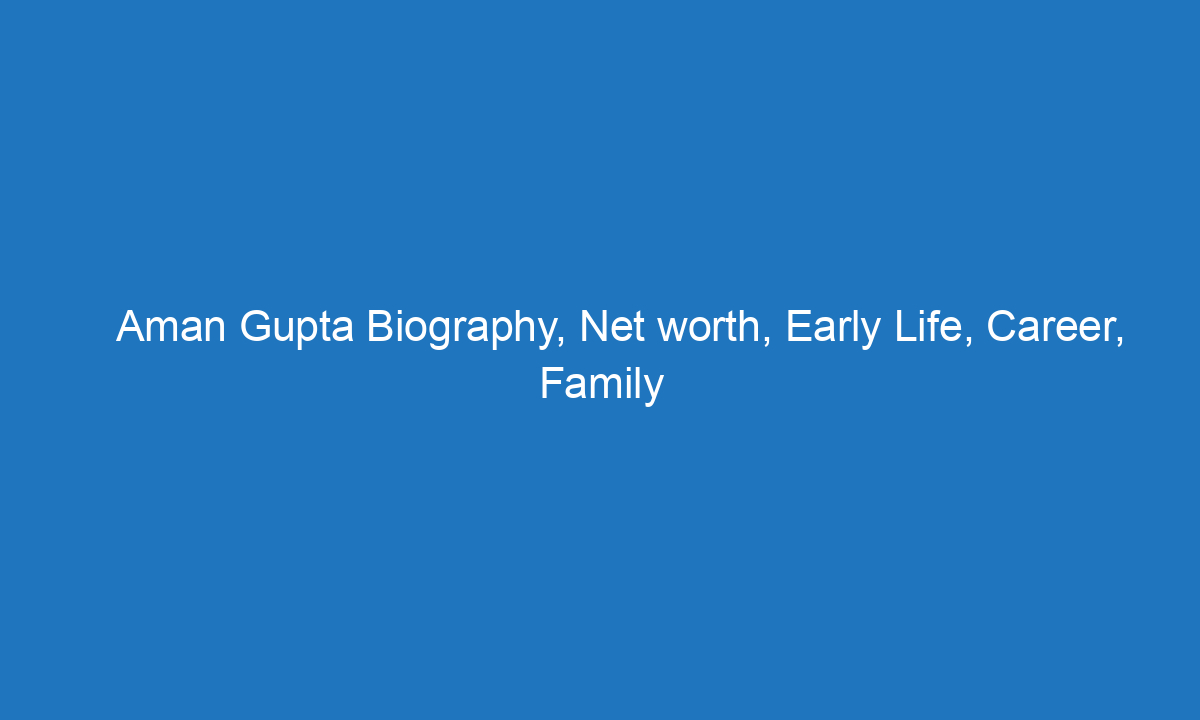 Aman Gupta Biography: With the increasing popularity of Shark Tank India, its judges (Sharks) have also gained popularity. Before the broadcast of the show on Sony TV, they were not so known personalities although people across the world were using their products and services in their daily lives. Shark Tank India is an Indian adaptation of the US Business reality show where upcoming entrepreneurs pitch their innovative business ideas to the judges so that they can get investments. In India, it’s the first season that includes seven sharks (investors) who are investors and entrepreneurs in different industries. Aman Gupta is one of the popular sharks in the show. He is the Co-Founder and CMO of Imagine Marketing Services Private Limited which owns the popular audio consumer electronics brand “boAt”. If he is your favourite too and you are searching for Aman Gupta Biography then this article is for you.

Even after facing so many failures in business Aman Gupta did not stop and finally came up with a start-up that has now become the first preference of youths of the country. His audio electronic brand boAt has become a top global brand in a short span of time. The company has shown astonishing growth and with that, it now covers 48% of the market share in this particular industry. To know more about Aman and his success story keep reading this article.

Aman Gupta is a Delhi boy just like Peyush Bansal and Ashneer Grover who are also the investors in Shark Tank India. He was born on 4th March 1982 in Delhi and completed his schooling at Delhi Public School (DPS) R.K. Puram in Commerce stream in the year 1998. Aman was born to Jyoti Kochar Gupta and Neeraj Gupta. He has two siblings- one brother Anmol Gupta and a sister Neha Gupta. He tied the knot with Priya Dagar in the year 2008. They are blessed with two daughters- Ada Gupta and Miraya.

After completing his school education at DPS he took admission into Shaheed Bhagat Singh College, Delhi University in B. Com in 1998. During his Graduation days, Aman’s father suggested him to become Chartered Accountant, and in the year 1999, he took admission into the ICAI CA program. He lost his interest in CA in between the program. Despite this, he completed his CA in 2002 and become one of India’s youngest CAs.

After completing CA he joined Citibank and worked there as an Assistant Manager till 2005. In September 2005 along with his father, Aman started a new business named Advanced Telemedia Pvt Ltd. He was the CEO and co-founder of the company. The company did not do well then his wife suggested he pursue MBA. In the year 2010, he was admitted to the Indian School of Business in the MBA (Finance and Strategy) program. He was also an alumnus of Kellogg Graduate School of Management with an MBA (General Mgmt & Marketing) as an exchange student.

Aman along with Sameer Ashok Mehta founded Imagine Marketing Services Private Limited in November 2013. It is the parent company of the brand boAt. Aman is the Co-Founder and Chief Marketing Officer of the company. boAt is a millennial-centric brand that deals in consumer audio electronics and wearables such as headphones, headsets, smartwatches, speakers, and many more. It has gained so much popularity in a short span of time and now is counted among the top five wearable brands in India. The not-giving-up attitude of Aman Gupta and his learnings from failures has helped him to make a place in the market.

Aman as an Investor

Aman Gupta was already an active investor before joining the reality show. He has invested in several companies and start-ups. Some of his investments are listed here-

Aman is quite active on social media and through which he keeps updating his fans and followers. Check out the links of his various social media accounts shared as under and get connected with him-