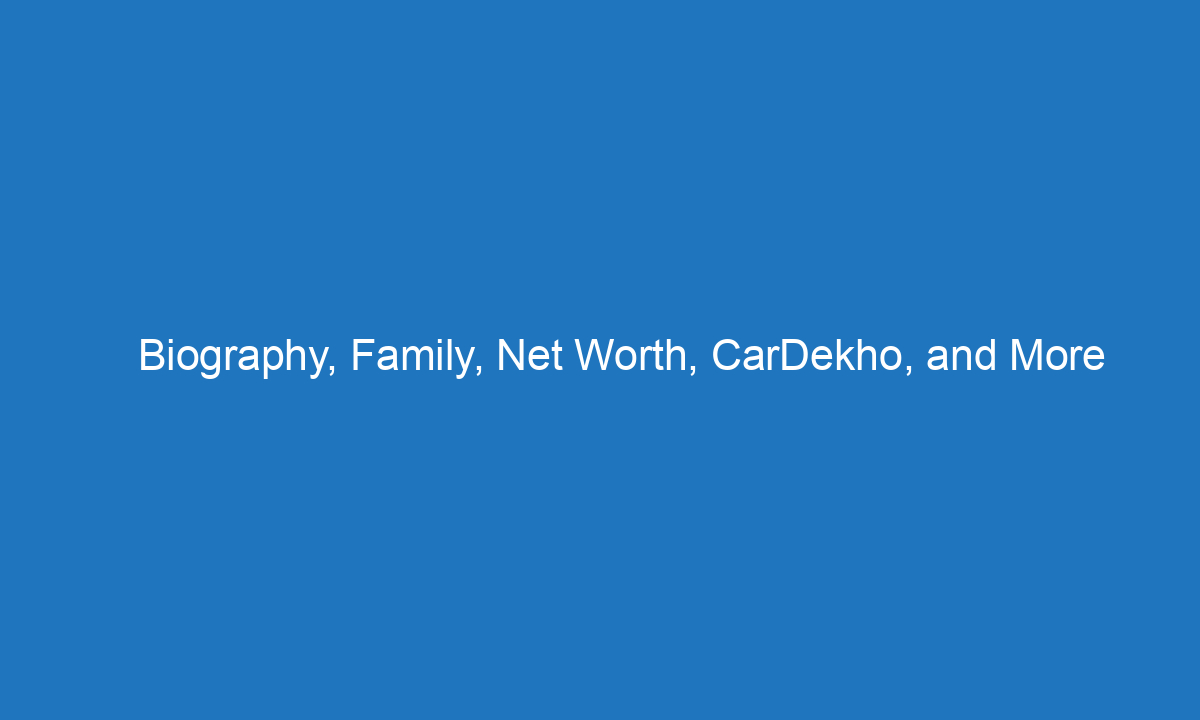 Amit Jain: Shark Tank India premiered in 2021. It eventually emerged as one of the most talked about shows on Television in the year. Due to multiple complications in place with the judge, Ashneer Grover, the show had to replace him. Amit Jain, who co-founded and is the Chief Executive Officer of the CarDekho and InsuranceDekho groups will be entering as the new judge. He shall be stepping in the shoes of Grover and will feature along with the previous judges, Aman Gupta, Anupam Mittal, Peyush Goyal, Namita Thapar, and Vinita Singh.

The Shark Tank Season 2 is all set to premiere on 2 January 2023 and it will be thrilling to watch the professional perceptions and ideologies of Jain. Check all the details you need to know about him, his net worth, age, career, family, business, investments, and much more here in this detailed Amit Jain Biography.

Known to have co-founded CarDekho, Amit Jain is the Chief Executive Officer of the respective firm group. He has been known to have risen to fame since CarDekho turned into a huge leading option in the online market for reselling and purchasing used cars. Post that, he also extensively launched other sites such as InsuranceDekho, BikeDekho, and CollegeDekho. Furthermore, he has largely contributed as the leading member of the CarDekho group in its inquisition of other relative companies such as Gaadi, Zigwheels, Carmudi Philippines, and Carddrift.

As of now, Jain gained massive attention from the media due to reports, followed by promos, for his appearance in the latest season of Shark Tank India as one of the judges. Apart from the host, Rahul Dua, Amit Jain is also another debutant in the show.

Early Life and Education of Jain

Amit was born in a Jain family on 12 November 1976 in the city of Jaipur, Rajasthan. He has a younger brother, Anurag. His mother was a homemaker and his family depended on the earnings of his father for morsels and bread. He lived his early life in the city of Jaipur, which happens to be his hometown. His schooling proceeded at the St Xavier’s Senior Secondary School in the city where he took up sciences in the Senior Secondary Examinations. He passed the national-level engineering entrance examination to get admitted to the Indian Institute of Technology in New Delhi.

He graduated to become an engineer and take up a job at a software development firm, named Trilogy in 2000. His prime aim was to concentratedly develop the website addressed at www.yourbillbuddy.com. He was employed at the firm till 2007.

Amit Jain and his brother, Anurag Jain had to frequently head back home when their father developed an illness. It was lethal and soon, he passed away being outlived by his family, and business in 2006. Finally, in 2007, Amit and Anurag returned home to settle back and take care of the family business. It was then that they started selling gemstones due to the generational name in the market. However, due to a lack of interest, the two tried their hands at starting a software company by the name of GirnarSoft. The company grew enough for them to try their hands at the CarDekho software in 2008.

The idea for CarDekho developed in the heads of the Jain sibling’s post attending the Auto Expo held in New Delhi. They designed the porta in order to deliver accurate information about cards so as to help potential buyers in making a very apt decision ahead of purchasing their vehicle. Furthermore, they incorporated the website in a manner where they could connect buyers and sellers for used cards. While they proceeded with this venture, they faced an extreme loss of nearly Rs. 1 crore in stock marketing and shares. This slowed a lot of things down for the two until 2015 when they finally noticed a substantial rise in the graph of CareDekho. The portal started gaining unmatchable popularity leading to much better earnings that they were able to drive from it. Their idea was always well appreciated as they were able to receive funding from an American firm, Sequoia Capital. Further, they merged CarDekho with companies like Gaadi, Zigwheels, Carmudi Philippines, and Carddrift.

After successfully establishing CarDekho, the siblings invested to lay the foundation of similar companies InsuranceDekho, BikeDekho, and CollegeDekho. The three companies made substantial growth in the market and were able to generate revenue as well.

As per TOI, Amit Jain has a net worth of Rs. 2900 crores. The Co-Founder and CEO receive a large share of his earnings from the first company, CarDekho which is presently evaluated at nearly Rs. 110 crores. Furthermore, he also gains a certain amount of profit from InsuranceDekho, BikeDeko, and CollegeDekho. He invests in a lot of start-ups and stocks and all of this sums up to form his earnings.

Family of CarDekho CEO and Co-Founder

Amit Jain is married to Pihu Jain who works at Girnar Software Private Limited, reportedly. The couple parents two sons, who were born twins. He has a younger brother named Anurag and they share a very cordial relationship, both in and outside the business world.

Due to certain reasons, Ashneer Gover will not be featured in Shark Tank Season 2. Furthermore, Ghazal Alagh will also be seen not making any appearances in the upcoming seasons. Additionally, the host Rannvijay Singha has been replaced by the comedian, Rahul Dua. Thus, due to the absence of two sharks, Amit Jain has found his way into the show. Season 2 shall be aired on Sony Liv application and Sony TV from 2 January 2023.