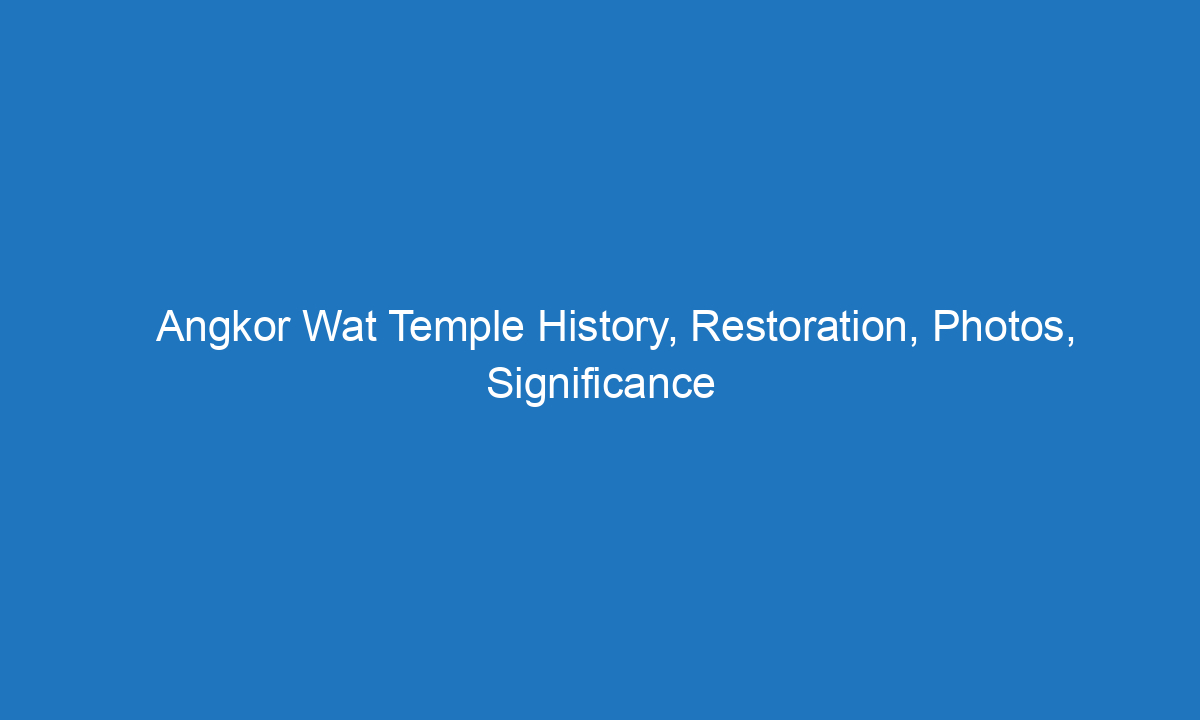 Angkor Wat Temple is the monument of the largest religion in the world. It is a Hindu temple. Now it is also known as the Hindu-Buddhist temple after its conversion in the 12th century. If you want to get more information regarding  Angkor Wat Temple’s History then continue reading the article!

Angkor Wat Temple is also known as ” The City of Temple”. This temple is made under the province of Siem Reap, Cambodia and the Prince has dedicated to God Vishu in the 12th Century. This temple is also amongst the list of most significant religious buildings ever created. Also, the temple of Karnak at Thebes, Egypt and others are even larger.

The Upper part of its structure represents the mountains of Eternity, and its moat represents about the eternal waters. The whole structure is made by using 1.5 cubic meters of sand and it is gaps are filled up by Silt in the 12th century. The temple is constructed under the rule of Khmer Emperor Suryavarman II but it is completed under Jayavarman VII.

The area covered by this temple i.e., 420 acres of land along with having a central tower of 213 feet i.e., 65 meters high. The width of its Moat is 650 feet i.e., 200 meters wide and along with it having its area is covered by a perimeter of three miles i.e., 5km with a depth of 13 feet i.e., 4 meters. In the 13th century, the temple took over by the monks. The centre of the Khmer Empire has its largest complex in the region, but after some time, in the 16th century it has been largely abandoned, and its nearest area is all covered by the Jungle.

It was again discovered by western explorers in the 19th century, and it cleared all the nearest overgrowth areas. But now it is mentioned in the list of most popular tours in the world, and now it is maintained by the UNESCO World Heritage Site.

He said that he had visited with the vice president of India to see the biggest temple in the world. Nowadays, they are restoring and renovating the temples and, in this project, many Indian civilizations situated outside India are contributing to renovating it.

He also said that during his past days of his life he is the ambassador to China. He has seen many Hindu temples there in China, also. He also stated that there is a special connection between Ayodhya in Uttar Pradesh and Korea.

He also said about the Shrinath Jee Temple in Bahrain by saying all these temples are made in these places because our Indian people are spread there to bring this culture. Along with this, he said that they also support Indians for their work towards contributing to the betterment of society and also, he said that at present, there are more than 1000 temples in the US.

Further, he said that there is 3.5 crore Indians who are leaving outside India and making the Indian culture more popular, so we need to support them for their contribution towards society. He also said that prime minister Narendra Modi has given amounted to rupees 200 crores to build a Ramayan Circuit in Nepal, and they also made the revival of Thiruketheeswaram Temple in Sri Lanka which was closed for 12 years and then reopened in 2002. Also, in Nepal’s 2015 earthquake, many temples were destroyed, and then the government of India gave USD 50 million to rebuild and renovate the temples. All these efforts are made by the government of India so that people can visit the temples and spread and find positivity there by visiting the temples around the world.

The statue of the temple is:

The significance is that it is the Pride of the Cambodian people before the time of getting independence from France. If we focus on the national flag, then we will come to know that Angkor Wat is centred on the Cambodian flag having its red colour background and also having its two strips of blue. This feature was made during its construction time means at its initial stage in 1969. It is also popularly known as the funerary temple of king Suryavarmen II before its completion. Stones were used only for religious construction only. These structures are famous for the height of the most giant tower of Angkor Wat that which was seven hundred feet tall. Bas-Relief elements are used for the construction of galleries. The most common thing was the artwork of devatas. The structure represents a miniature version of the universe. The towers are told to represent Mount Meru which is a mountain with five peaks. These towers indicate the five different peaks of Meru.