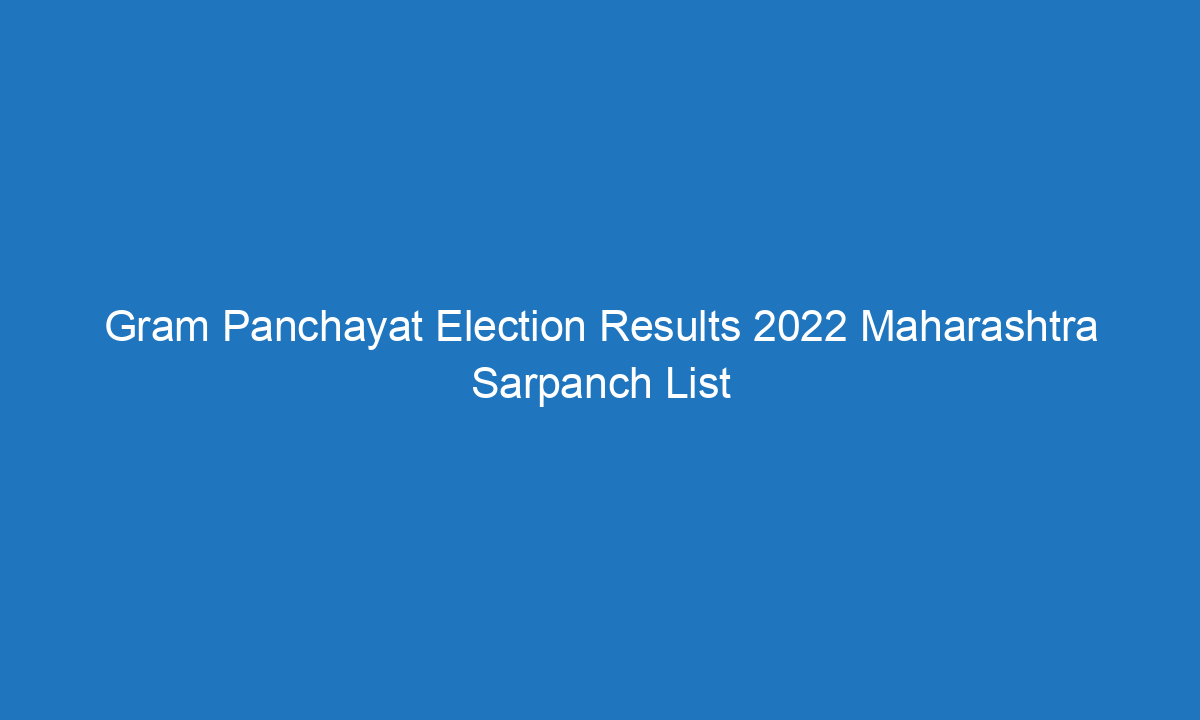 Get the essential information on Gram Panchayat Election Results 2022 and Maharashtra Sarpanch List from this article.

If you want to know the information on Gram Panchayat Election Results 2022 then read the entire article!

A Gram Panchayat is elected to handle a village for about 5 years. During this time, the appointed ministers or parties have to look after the overall development of the village. Although rural areas help our countrymen with agricultural and dairy benefits, they also need to be improved, unlike urban areas. Therefore, by electing Gram Panchayats, the Government ensures the secure development of a village.

Last week elections were held for Gram Panchayat in Maharashtra. Parties like BJP, Shiv Sena, Mahavikas Aaghadi, and more have listed their names for voting. The local citizens had a clear perspective in their mind to give votes to their desired party. People would like to have proper development in the areas where they are spending their lives and so they have chosen the right party during polls. Now, people are waiting for Gram Panchayat Election Results!

Devendra Fadnavis, Deputy Chief Minister is predicting that there are chances for the Bhartiya Janta Party to win elections. According to the recent news, BJP already have 252 Gram Panchayats with them and the Shinde Group. That is why Mr. Fadnavis was pretty sure yesterday for the win or lose game in the Gram Panchayat Election Results 2022.

Counting is going on since morning in various districts of Maharashtra for Gram Panchayat Election Results. According to the LIVE update, counting is going on smoothly in Kolhapur district. BJP Shinde group is getting the maximum votes. We have shared the latest counting in the table below :

It is clear from the above statistics that the 4 GP posts have been occupied. Among these, Bhartiya Janta Party (BJP) is taking over the elections. Shinde group is also running ahead in elections in Radhanagari taluk.

Now, let’s get the highlights from the Pune District for Gram Panchayat Election Results 2022.

We can analyse that Shiv Sena has won this time with the majority of votes. But the counting is still going on, so, we cannot assume which party will be going to win the elections this year. We can only hope for the best and most reliable ones for the ministerial posts.

Know How Shinde Group is Taking Over

Voting in Pune District was started around 10:00 am. After winning in Sarola and Kasod Gram Panchayat, Shinde Group has also opened an account in the Aurangabad district.

But BJP is not that much in the bottom line. However, the party has won in Bamani Gram Panchayat in Kagal taluka and Karveer taluka. It is been predicted that the final results will be announced by this afternoon.

There are overall 27923 Gram Panchayats in Maharashtra state with 27709 Sarpanch. The voting was ended on last Sunday, 18th December 2022 in which many parties have participated.

Shri UPS Madan, State Election Commissioner had recently announced that the elections are over and now, it is the time to begin with counting!

The above-listed were the panchayats at which the elections were held. Now, the Sarpanch List is yet to be Announced after the counting gets over this afternoon. The parties and local people will have to wait some more time to know who the winner is in the 2022 elections.

From this article, you might have received the required information on Gram Panchayat Election Results 2022 for Maharashtra. Let us now wait a while to know whether the Shinde group and the Bharatiya Janata Party will win or the other parties.