Independence Day Speech: Every year on 15 August, India observes Independence Day as a national holiday to commemorate the nation’s independence from the United Kingdom on 15 August 1947. The provisions of the Indian Independence Act of 1947, which ceded legislative sovereignty to the Indian Constituent Assembly, went into effect on this day. Independence coincided with India’s division, in which British India was separated along religious lines into the Dominions of India and Pakistan. 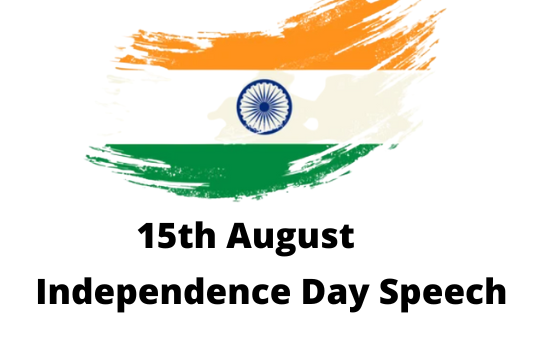 Good Morning everyone!
Every year on August 15, India observes Independence Day as a national holiday to commemorate the lengthy period of our country’s independence from British domination. After a series of movements in which many freedom fighters gave their lives, India attained independence on August 15, 1947. Jawaharlal Nehru became the first Indian Prime Minister after independence to raise the National Flag at the Red Fort near Delhi’s Lahore Gate on 15 August 1947.
Students, instructors, parents, and others gather to commemorate Independence Day by raising the flag and singing the National Anthem. The Red Fort, which houses the Indian Prime Minister in the national capital of New Delhi, also houses our National Flag. Following that, a 21-gun salute is fired, and a chopper rains tricolour flowers on the flag.
Our flag’s colours indicate various things: saffron represents courage and sacrifice, white represents peace and truth, and green represents faith and chivalry. Our flag features an Ashok chakra with 24 evenly distributed spikes in the centre. On this auspicious day, we remember the enormous sacrifices of Bhagat Singh, Sukhdev, Raj Guru, Gandhiji, and other daring freedom fighters for their everlasting contribution to India’s independence.

Today, we are all here to recognise our fortunate of being born in a free India and to commemorate our country’s 75th anniversary of independence. We must ask people born before 1947 to remember the agony of being slaves under colonial control. Fighting against those strong giants – the British – was a Herculean task for every Indian back then.
Those trying times and struggles must not be erased from our memories. As a result, on Independence Day, we not only celebrate our independence, but also pay tribute to those who fought for it, those who had a vision for our country, and those who sacrificed themselves for it.
The concept of being an independent nation, with sovereign authority to determine our future, throws enormous weight on our shoulders. The significance of its magnificent story is that this nation has gained international respect for the democratic path it has chosen. We can confidently state that in its 10,000-year history, India has never invaded another country.
On this day, we remember Mahatma Gandhi, the man who inspired our liberation movement, and the martyrs who gave the ultimate sacrifice for our country’s liberty. We are also reminded of our great patriots’ unwavering effort to free our nation from colonial rule.
Gandhiji sought independence from both foreign authority and the indigenous social constraints that had long imprisoned our society. Every other Indian was led down the road of self-belief and hope for a better future. As proud citizens of a country, we have the freedom to live freely as citizens of a democracy. Because of the vision and sacrifice of our freedom fighters, we now live in one.
Every year, a large ceremony takes place on Rajpath in New Delhi, where the national song is sung after the Prime Minister hoists the flag. In addition, the national flag is saluted by firing 21 cannons as the national song is played, and flowers are also rained by helicopter. Parades are attended by all forces. Finally, we cannot declare that the 15th of August is simply about liberty.
This day evokes a wide range of emotions; it reminds us of the agony of slavery; it defines sacrifice; it demonstrates that some wars can be won through nonviolence; and, above all, it makes us appreciate and cherish the freedom we have today. As proud citizens of this country, it is our responsibility to do our duty and work together for the growth and development of our country. With our ancestors’ sacrifices in mind, we should take an oath to construct a better future for our nation.

India has celebrated its independence day on the 15th of August every year since 1947, when the country gained independence. On this day every year, the Prime Minister hoists the flag to commemorate the occasion. Following the Prime Minister’s address to the nation, a military parade takes place, which is broadcast live across the country. Furthermore, the President gives the Independence Day speech.
For more than a century, the British dominated India, exploiting its people. Many freedom fighters gave their lives to end slavery in India. The value of an Independence Day speech cannot be overstated. Many educational institutions and other organisations organise Independence Day addresses to educate the younger generation about India’s freedom struggle.
The significance of Independence Day
Mangal Pandey, a well-known Indian freedom activist, is often seen as the forerunner of the 1857 rebellion against the British, which is regarded as India’s first battle for independence. Independence Day is significant because it honours the bravery and spirit of the freedom fighters who fought for the nation’s independence from British rule. Every year, Prime Ministers hoist the flag and address the nation from the Red Fort, commemorating the day as a source of national pride and honour.
Writing or starting the independence day speech is crucial to express your thanks as an Indian citizen to these selfless liberation fighters. India’s Independence Day commemorates not just the country’s liberation from British rule, but also the partition of India and Pakistan, which occurred at midnight on August 14, 1947. Writing an independence day speech for children is vital for educating them about the Indian independence movement at a young age.
Speeches for Independence Day in English:
If you are intending to make an Independence Day speech, here is a sample speech to refer to a long Independence Day speech and a short Independence Day speech for children from which you may take inspiration.
Long Independence Day Speech in English:
Today marks the 75th anniversary of India’s independence. Our distinguished Prime Minister will raise the flag at the Red Fort in Delhi. This will be followed by a military parade led by our esteemed troops. It is an eye-catching event that is being televised around the country and watched by millions of Indian citizens.
As a proud Indian born in an independent India, I would like to recognise the sacrifice of our freedom fighters. The national commemoration of this day should be more than merely a holiday, a patriotic movie on television, or a store discount. Lokmanya Tilak, Sardar Vallabhbhai Patel, Bhagat Singh, Mangal Pandey, Sukhdev, and many more dreamed of, and fought for, a free India.
India became a sovereign democratic republic after the constitution went into effect on January 26, 1950. Each citizen was assigned certain rights and responsibilities. For example, following independence, every Indian citizen was granted the right to vote, whereas America needed 150 years to grant the same to its inhabitants.
India has accomplished a great deal since its freedom. We have all watched the greatest events of all time during the last 75 years, making us proud residents of this country. India created and designed Asia’s first nuclear reactor, the Apsara nuclear reactor, on August 4, 1956. In 1975, we created our first satellite, Aryabhatta. We won Oscars for films including Slumdog Millionaire, Mother India, and others! We won our first world cup under Kapil Dev’s captaincy.
Indians witnessed the Green Revolution, the White Revolution, demonetisation, the strengthening of the Indian army, surgical strikes, the removal of Article 370 from Kashmir, and many more revolutionary events. India is the only country where people of many religions, castes, languages, and cultures coexist peacefully under one roof. This kind of unity in diversity will not be found anyplace else in the world.
While we celebrate our 75th year of independence, we cannot ignore the issues we confront. Corruption, illiteracy, the safety of women, poverty, pollution, and other issues However, revolutions are taking place thanks to the brave youth generation. This will result in good developments over the next few years.
I’d want to conclude by saying that no matter how many times I celebrate my country’s achievements, they will always be less. Our country is our motherland, and we should be grateful for everything we have gained from it.

Who will be India’s next President? Check Winning candidates list, Result Date