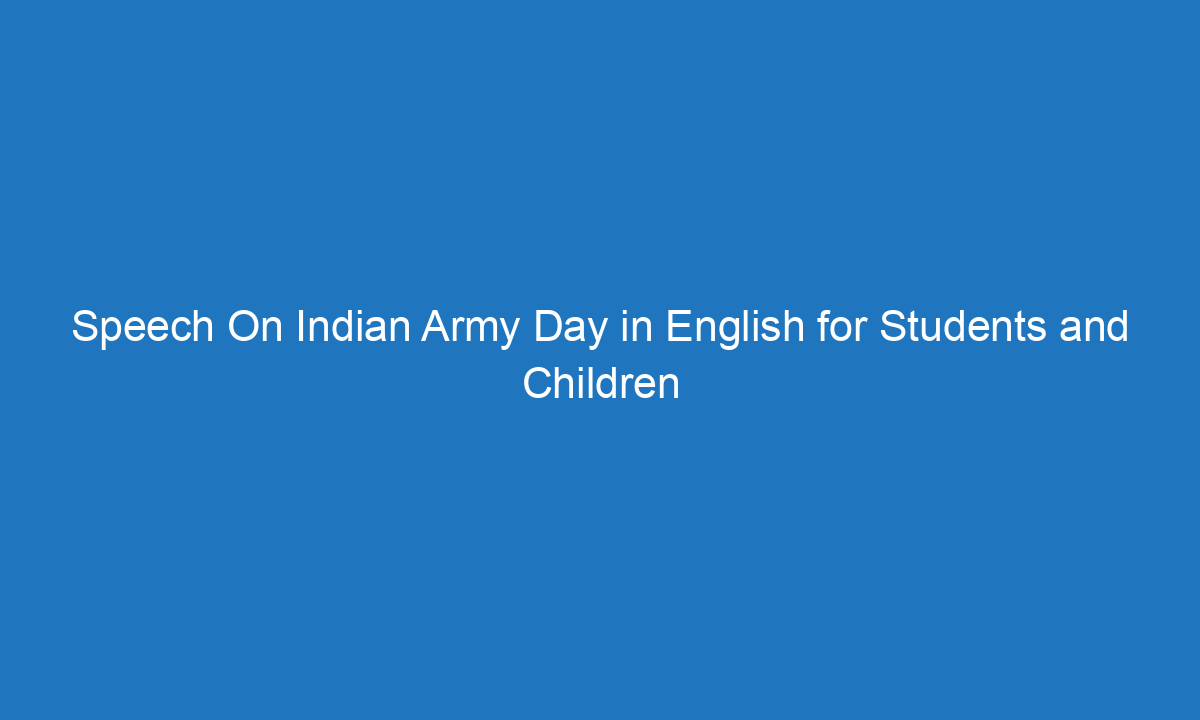 Speech On Indian Army Day: Indian Army is a highly prestigious entity in the nation. To celebrate them, Indian Army Day is celebrated. While delivering the speech, the speaker has to be aware of the various factual information and much more attested to the occasion. The speech can be rather confusing as you might be dubious about how to proceed with the speech writing and how to deliver it. Thus, the following article shall provide insight into how you can frame your Speech On Indian Army Day in English as Students and Children. Additionally, the sample speech provided will also give a very particular idea for the speech.

How to Frame and Write the Speech?

You must discuss the reason and background for the celebration of Indian Army Day. It is imperative to mention the national celebratory plans that are followed on the occasion. One can also provide an insight into the latest trends pertaining to the celebration of the occasion. Additionally, while talking about Indian Army Day, the speaker can also discuss the importance of the entity to civilians. The introductory paragraph must offer an insight into the Army’s sacrifice and valour. Further, introduce the occasion while discussing the historical backdrop and the reason for the commemoration. The ways and methods in which Indian Army Day is celebrated must be discussed. In conclusion, the content must focus on the relevance of the event followed by an appreciation of the Army.

Quotes on the Indian Army

You can add quotes to the speech in order to make it more relatable and inspiring. Here are a few sayings that you can add to your speech:

Good Morning/ Afternoon/ Evening to everyone present here. Today, I intend to discuss the Indian Army Day and there seems to be no perfect occasion than the event itself. Patriotism in India has a separate level. Be it young kids or the older generations of the nation, each and everyone is very particular about the motherland. It seems very rational as India has been tremendously attacked by multiple enemies since the very beginning. Be it the exploitation of Indians by foreign rulers in ancient times for the rich belongings of the land or the colonisation by the Britishers, Indians have been through all. Till now, the aftermath of the colonisation remains with India in firm or perpetual border tensions with Pakistan. Additionally, with China being very inconsiderate of the Indian boundaries, there is a huge threat in the east as well. With Bangladesh and refugees constantly trying to enter the Indian Territories, the nation needs very strong border protection.

The celebrations are marked by the main Army Day parade which is hosted at the Cariappa Parade ground in Delhi cantonment by the Indian Army every year. The parade is joined by Param Vir Chakra and Ashok Chakra awardees. Furthermore, Gallantry awards and Sena medals are awarded to the exceedingly brave soldiers of the nation who made evident impacts through their service to the nation. Even though the Indian Army carries out the celebrations on its own within its premise, the latest trends have also witnessed civilians and other strata of society coming up on social media and employing the platform in order to express gratitude for their unmatchable service. As they say, “Our flag does not fly because the wind moves it, it flies with the last breath of each soldier who died protecting it”, it is imperative to consider and respect the valour of the Indian Army and 15 January is just a special day where the bravery and unconditional service must be appreciated.