A B.Tech. degree student can choose from a wide variety of specializations, many of which are extremely interesting. As far as we can tell, India is producing more than a few thousand engineers annually. As the number of students desiring to be engineers rises, so too does the number of engineering schools available to those students. However, it is not far-fetched to claim that only a few of India’s best engineering colleges are able to keep up with the growing demand for engineering seats. 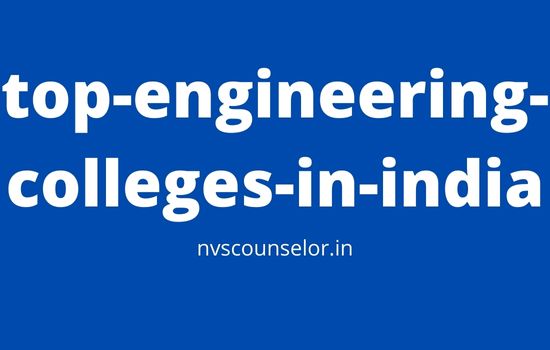 Ranking of the top engineering colleges in India

1) Based on NIRF Ranking:

Each year, the government of India provides a ranking of all colleges in India in the national institutional ranking framework, which is part of the Ministry of Human Resources and Development. The NIRF ranking provides a thorough picture of the numerous components that make up a college. In order to construct the ranking results, the MHRD’s expert committee uses a set of guidelines that must be adhered to as the determining elements.

2) Based on placement records:

We can claim with certainty that engineering is the national profession of our country, as the country produces an average of 25 lakh engineers each year. Indeed, we live in a country where engineering is the first choice for many people before deciding what they want to do in life. That’s why so many engineers are also musicians, authors, dancers, and photographers, for example. These enormous numbers of engineers generated each year come from an equally large number of universities. Even if this may not be our topic of discussion today, the truth remains.

Depending on the quality of facilities available, each of the nation’s colleges has created a different pricing structure. The B-tech Fees in India are based on current corporate trends and university requirements. Selected engineering students can pay their tuition fees to a specialized financial department under each college’s administration. To assist students with questions about fees, each college has designated a finance staff. Because of the wide range of quality differences among engineering schools, the costs of both tuition and living expenses vary widely among them. Some private universities charge a lot for engineering courses, despite the fact that the cost is minimal. The price structure for engineering courses in India has been devised and developed by institutions around the country in order to meet the needs of students. The fees for engineering schools can be paid using a debit card either online or offline. The current year’s fee can be paid all at once. According to the college’s policy, candidates who are unable to pay the entire amount in full can choose to pay the fee in installments.

Top engineering colleges in India except for IIT

Tips to choose the top Engineering college in India 2022

Engineering college selection is a major decision for both you and your family. For the rest of your life, these four years will assist you to figure out what you want to do. You should not wait until the last minute to make this decision; the senior year is the ideal time to do it. If you’re looking for a ‘right’ college, you’ll have to find one that’s right for you. Here are a few pointers to help you narrow down your options for technical schools:

Get to know the Top Engineering College

Bombay’s Indian Institute of Technology (IIT Bombay) is a public research university and a technical institute in the city of Mumbai, India.
In 1958, IIT Bombay was established. Institutes of National Importance (IITs) were established by the Parliament in 1961. For the growth of technical education in India, a Government of India commission suggested the construction of four higher institutes in 1946. The first 100 students were admitted in 1958, and the school was established in 1957. To date, the Powai campus has grown to encompass more than 584 significant structures across an area of about 2.2 square kilometres since the institute’s inception.
IIT Bombay is regarded as one of Asia’s top engineering schools, as well as the most prestigious and most difficult to get into among Indian institutions. It has long been the first choice of top-ranking students in the sciences and engineering fields. Joint Entrance Examinations (JEE), Joint Admission Test for Masters (JAM) and Graduate Aptitude Test in Engineering (GATE) are some of its most popular programmes (GATE).

The campus of IIT Madras covers an area of 2.5 square kilometers (0.97 square miles), part of which was once the Guindy National Park. A total of 1,250 administrative and support employees serve the school’s approximately 600 professors, 10,000 students, and 10,000 members of the community. Since it was granted a charter from the Indian Parliament in 1961, the campus has grown tremendously, with vast numbers of chital (spotted deer), black buck, bonnet macaque, and other unique wildlife populating the protected forest. The precipitation drains into a natural lake that was deepened between 1988 and 2003.

In the NIRF ranking, the Indian Institute of Technology Delhi won second place, thanks to its highly effective faculty and top-notch course materials. In addition to outstanding knowledge and technical advances, the course provides a solid foundation for both theoretical and practical learning.

With a magnificent launch, game spaces, computer rooms, and study rooms, the campus has a total of 11 male dormitories and 3 female hostels with a variety of amenities. Over 500 organizations visit to campus to recruit students, according to a set method.

After India’s independence in 1947, the institute was initially set up to teach engineers. As time has passed, the institute’s academic offerings have become more diverse, including courses in business management as well as law, architecture, and humanities. More than 22,000 people call IIT Kharagpur home, making it one of the largest campuses in India.

IIT Kanpur is praised for its extracurricular activities as well as its academic excellence, which places it among the top five NIRF-ranked institutes in the country.
In addition to honing their technical skills, engineering students also get the opportunity to broaden their horizons in other areas.
It has a meeting room and a large dining area for the participants. It’s a great place to work, and the wage packages are getting better and better each year. It’s possible to find worldwide corporations that offer deals in the tens of millions.

The IIT Guwahati, like all the IITs, has highly qualified professors and experienced teachers. In addition, there is a gym, a juice bar, a stationery store, and a laundry facility.
Every IIT has a central library and a television room. This hotel has excellent Wi-Fi. There are basketball, football, and volleyball courts on campus to help students participate in a variety of sports. Popular firms like Google and Amazon can be hired with the packages supplied, which are around 20 LPA.

Birla Institute of Science and Technology, which was founded in 1901, enjoys a close relationship with its students and faculty. In 1943, Pilani became the site of the first university campus. When the company grew, it spread its branches across the country and even outside to places like Dubai and Hyderabad.
The BITS Pilani is one of the most renowned engineering schools in the world, offering a wide range of programmes, including B.E., M.Sc., and B.Pharma. The Birla Institute of Technology and Science holds entrance exams each year to determine who will be allowed to enrol in these programmes in the future. Private colleges rank it as number one, whereas according to the NIRF ranking methodology, it is classified as number 25. “

This university, located in Vellore, India, was founded in 1984 and offers a wide range of programmes, including graduate, postgraduate, and research degrees. As a result, it provides students with dual-integrated courses. Almost every member of the average class has received a job offer from a different company.
Biotechnology, electronics and communication, and computer science engineering are the most popular BTech fields. Students who wish to be considered for admission to the Vellore Institute of Technology must take the required exams and score at or above the minimum cut-off score.

Delhi College of Engineering was established in 1941 in Delhi and was originally named as such. In 1962, it changed its name to Delhi Technological University after becoming affiliated with the University of Delhi. Many courses are available, including BTech, MTech and MBA programmes and research opportunities.
When classes are being taught, students have access to both shifts. In order to get admitted to this college, students must score at least the minimum cut-off on the joint entrance exam. This university has a NIRF ranking of 34.

What are the most popular streams in the field of engineering?

Aerospace engineering, according to this century, is one of the most fascinating open engineering fields. IIT Madras and IIEST ship or contain this school of engineering deliver the best information in the field of aerospace. Additionally, you have the option of studying Marine Engineering and joining the merchant marines.
Indian Maritime University, Chennai and the worldwide Maritime Institute, Noida are the best options for those who want to study marine engineering.
In addition, mining and petroleum engineering are popular concentrations.

Is it possible to have two courses(eg diploma and BTech) going on at the same time?

If a student desires to pursue both a diploma and a degree, he or she must complete one course online and the other one in person.

What are the examinations that the students need to appear for to get into the top engineering colleges of India?

WBJEE, UPSE, CET, and GUJCET are the exams that students must take in order to enter into engineering colleges or the joint entrance tests.

What can be done after being completed with the B.Tech degree?

Depending on one’s goals, one can pursue a Master of Science in Technology (MTech) or a Master of Business Administration (MBA). It is possible for them to work for commercial companies or prepare for various government positions, as well.